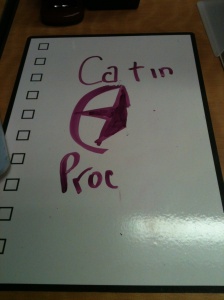 The TV screen showed an empty bank vault. He was about to turn it off when, suddenly, a rope dropped down from the ceiling. What is this, he asked himself. Patience wasn’t normally one of his virtues, but he decided he should continue watching to see if the was something he should do something about, or not.

Two people in ski masks descended down the rope. When they reached the floor, they took a quick look around before discovering that they were alone. Each of them unslung an empty canvas bag from around their shoulder and began filling it with money.

Boring, Captain Procrastination thought. Just as he was about to turn it off, one of the robbers, in a sultry female voice said, “It’s so hot in here.”

The two figures took off their ski masks, revealing beautiful female faces. Interesting, our hero thought. Both women went back to stuffing money into their bags. Moments later, the other woman, also with a sultry voice, said, “It’s still really hot in here.”

Captain Procrastination’s eyes went wide as he watched them take off the dark jumpsuits they were wearing, leaving each of them in only their bra and panties. Even more interesting, his mind raced.

“You look real good in those,” the first robber said to the other, pointing at her undergarments.

“Not as good as you look in yours,” the second one responded, moving closer to her partner.

Before he knew it, the two women were kissing each other passionately. These are my kind of criminals, he told himself. In short order, the two women had removed what little clothing that they had been wearing. Just as they were about to get more intimate, a security guard showed up. “Hey,” he screamed at them. “Need any help?”

Not giving them a chance to answer, the security guard tore off his clothes and ran to them, where they welcomed him with open….arms.

Just as he was about ready to shoot a load for freedom, a man’s head appeared in his bedroom window.

Horrified, our hero stopped in mid-polish. As he fumbled pulling his tights back up, he heard:

By the time he got his pants back on, and ran over to the window, Rick Rolle was already gone. He thought about chasing after him, but he knew that he couldn’t do it. There was a pressure building up inside of his tights, and it wasn’t from how snuggly they fit him in the crotch. The movie had moved on to an even more interesting part, but as he reached down to start polishing again, his head snapped back up towards the window. For the first time in his life, he couldn’t do it. The thought of that bastard popping up out of nowhere to interrupt his play time made him too self-conscious to touch himself.

“He’s gone too far,” our hero declared. “If it’s the last thing I do, I will kick the ever-loving hell out of that mother(our hero didn’t cuss).”

Current Music: Resist by Within Temptation

Current Writing (this could take a while):
Seven Sceptres project

and Assorted Other Stuph