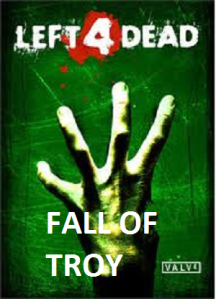 Rocket and Rebel pulled their triggers within a second of each other. The dual shotgun blasts killed the hunter on top of Panther and threw it off of her. Rebel pulled her sister off the ground while Rocket protectively stood over them.

Bulldog hit the hunter on top of Wildcat in the jaw with the butt of her shotgun, knocking it off of him. Quickly turning it around, she shot once, pumped, and shot it again. It fell to the ground. Looking down at him, Bulldog said, “I’m getting a little tired of always having to save your ass.”

He shook his head. “I’m getting a little tired of these damn hunters always pouncing on me. There are other people in the group, you know.”

By the time Wildcat got to his feet, Irish and Trojan had killed the hunter on top of Spartan. Bulldog looked them all over and, other than a few minor cuts, they were all ok.

They continued on their trek, pausing only to rest. There were a few zombies here and there, but, for the most part, the remainder of their trip was uneventful. Halfway into the night, they stood in front of their destination. It sat atop a fairly steep hill. A sign out front announced that this was the place they were looking for, but Trojan still felt the need to turn to Rocket and ask, “Are you sure this is the place?”

“I don’t know what to tell you. This is the place.”

“Let’s take a look around. Hopefully, we’ll find other survivors.”

“We should still take a look around the place. Chances are that it’s been picked clean, but I still want to look in case we can find some better weapons.”

“You know, assault rifles,” Wildcat interjected. “Automatic weapons. Machine guns. However you want to say it.”

Trojan took over, “We’ve heard stories from other survivors that we’ve come across that, where they had been, machine guns were everywhere. I don’t know about the rest of the country, but, where I’m from, the only guns that are readily available are shotguns, rifles, and handguns. So, how they have machine guns laying around everywhere, I have no idea.”

“And if this place is deserted, you’re expecting to find some?”

They slowly walked up the driveway. When they reached the top of the hill, the driveway ended at a gate, with a large parking lot behind it. In the center of the parking lot was a smaller, more secure looking building. The gate stood wide open.

Panther gestured to the building that looked like a school and asked, “Will, if that building has all the guns, what’s in there?”

“I don’t know,” Wildcat answered, “but we should check it out.”

Trojan gathered up all of his people. “Ok, everyone, here’s what we’re going to do. Wildcat, you take Irish, Spartan, and Bulldog and go inspect that smaller building. I’ll take the rest and check out the other one. If there’s any trouble, any trouble at all, meet back here. It won’t be hard to tell if the other group is in trouble, because you’ll hear the gunshots. Let’s go.”

Rocket entered the building first, followed by Panther and Rebel, with Trojan bringing up the rear. Walking through the halls, Trojan thought to himself had to have been a school at one time. All of the rooms looked like classrooms converted into offices. Everything looked normal, too. It looked like the people who used these offices went home and just never came back.

The whole building was a long hallway with rooms on the sides. A set of double doors stood at the end of the hallway. When they arrived at the room right before the double doors, they found that it was different than the others. This one looked like a fight had broken out in it. Office furniture was thrown everywhere. Papers covered the floor. Rocket picked something up and handed it to Trojan. It was a Molotov cocktail.

Shaking his head, Trojan turned to the other three and said, “Ok, there’s only one room we haven’t checked yet. Panther, you get the door. The rest of us will get ready to deal with whatever might be on the other side.”

Panther grabbed the door handle while the others aimed their shotguns at the door. Trojan nodded his head and Panther threw the doors open. Behind the doors was a gymnasium packed with zombies. Trojan’s jaw dropped when he saw them all. There must be a hundred in there, he thought. Panther moved as fast as she could, hoping to get the doors closed before the zombies noticed them. It was too late. The zombies knew they were there.

A second after she shut the doors, they started bursting out from the force of the zombie horde pushing against them. Trojan motioned for the others to get behind him, pulled out the Molotov that Rocket gave him, lit it, and threw it right in front of the doors. The zombies broke through just as the hallway erupted into flames. Knowing that the fire wouldn’t hold them back for very long, Trojan started shooting into the horde to let Wildcat know that they had found trouble.

Wildcat hadn’t even made it into the building when they heard Trojan’s gunshots. Every door was locked and there were no windows, so they walked around to the other side to check for another way in. All four took off running back to where they left Trojan’s group. When they got there, they found Trojan and the others running out of the door.

Behind them, the doors flew off their hinges. Two chargers kept running after breaking through. Trojan dove to the side, letting them go past. Everyone turned to shoot at them. After taking his first shot, Rocket heard something behind him. When he turned to look, the breath was blown out of his lungs as a hunter landed on his chest. His wife and her sister were close enough to get it off of him before it did any real damage.

As they were helping him to his feet, all three of them suddenly found themselves covered in boomer bile. Because he was helping to kill the two chargers, Trojan didn’t see the boomer in time to stop it from puking. He shot it twice, killing it. “Get back,” he instructed them. “You’re too close to the door!”

As if on cue, a horde of normal zombies, attracted to the boomer bile, came rushing out of the doorway. The three of them opened up at the horde with their shotguns, which seemed to thin out their numbers by half. Even so, there were still too many to handle on their own. Rebel heard a screech behind her. When she looked, she saw a smoker’s head poking out of the shadows. It was looking right at her sister. Before she could think, she stepped in between the two of them and was immediately wrapped up in the smoker’s tongue.

Rocket and Panther were too busy fighting off the horde to notice that Rebel was no longer next to them. Trojan, using his bat so he didn’t accidentally shoot them, was cutting a path towards them. Wildcat and the others had their guns pointed at the doorway, killing any zombie that tried to come out. Then, the ground shook. A second later, it shook again.

Wildcat turned around and saw the tank. It had busted its way out of the building they couldn’t get into. Since he was the only one with a rifle, Wildcat was the only one to shoot at it. The tank was too far away for their shotguns to be effective. Abruptly, the tank stopped and tore a huge chunk of concrete out of the driveway. Like a fastball, the pavement was thrown at the group. Bulldog and Spartan flew roughly to the ground as they were hit.

Current Music: Resist by Within Temptation

Current Writing (this could take a while):
Seven Sceptres project

and Assorted Other Stuph